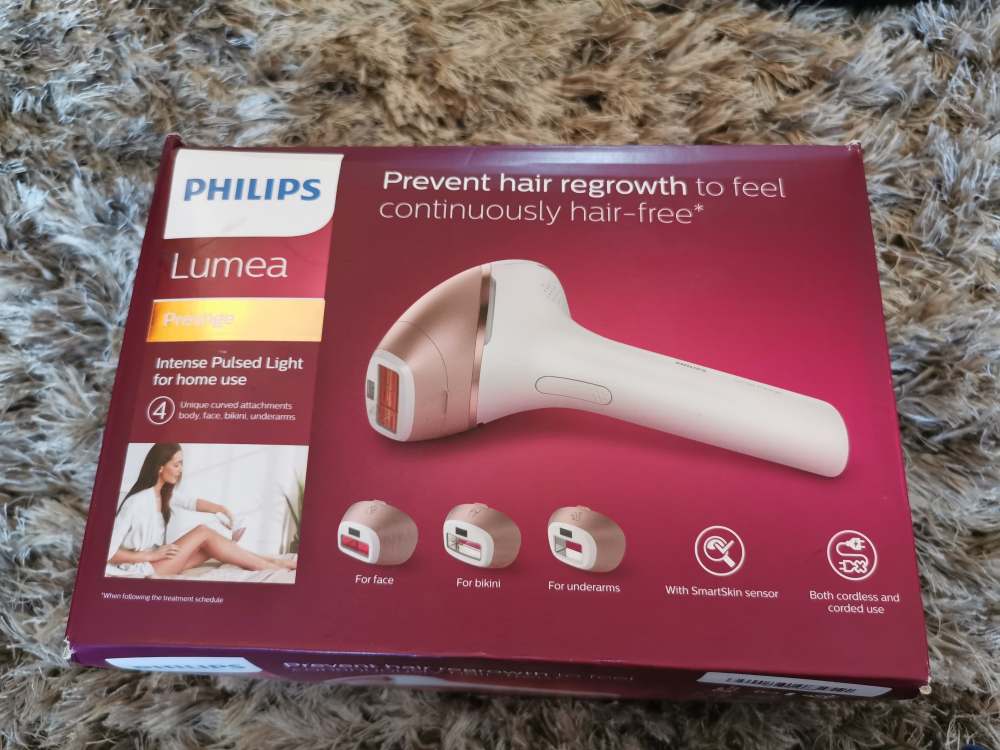 What more can I say but the Phillips Lumea changed my life and I do not make statements so hastily as with the expensive cost of £325 (27th May 2019 Price) it was not something I went out and brought on a whim.

I have suffered from Polycystic Ovary Syndrome (elevated male hormones in the female body) which causes a range of symptoms from heavy periods and excessive hair growth to name a few. I suffered from a faster than average hair regrowth after shaving, thicker more corse regrowth, extensive Ingrowing Hairs, Rashes and very painful Periods which in turn caused me to suffer from low body confidence. My condition in fact prevented me from going into Swimming Pools and I would constantly be in Trousers or Jeans and even Lycra Tights on a night out during the summer months. To others my rashes were nothing but to me it caused me considerable stress, low self esteem and I never really got to do the things I should have actually done during my younger adult life. Hitting Puberty and growing into a young woman meant shaving and shaving brought the dreaded rash. I dabbled with Sugaring and Electrolysis and I simply remember having such a massive complex during my younger life and the agonising pain of electrolysis. I was dreadfully unhappy and would just hide myself in my clothes. Now let me be clear my rashes were nothing compared to what others go through as in extreme cases some with PCOS can have hair across their face in beards or on their chests and well I was one of the lucky ones and if I had a little more confidence in younger life I would not have allowed it to affect me but you live and you learn. In addition to all the different home treatments I visited a beauty Therapist and she advised that if I tried ‘Waxing’ and continued to do so it would eventually prevent the hair regrowing. Unfortunately this was far from the truth and after 3 days of having the treatment I would get ‘Folliculitis’ which is where hair follicles become infected and I would get even more ingrowing hairs and rashes which I would buy a product called Tend Skin for (more money) which cost at the time nearly £20. ‘Tend Skin’ I used hoping it was a miracle cure however the reality was after over a year of ‘Waxing’ and going through the problems it caused to my skin and spending £000s on treatment and on products it simply never worked.

When I turned 40 it seemed that my PCOS had eventually started to improve as my hormones began to change and I simply had grown to old in the tooth to care any more; I had heard about all the other salon treatments such as Laser Hair removal but it was a risk and expensive and I simply did not have the money to keep returning to the Salon.

I jump smack bang into 2018 now where I discovered that there was a new home treatment by Phillips called the Lumea which I really wanted to give a go; but at over £300 it was a really big risk for it to not work again.

After some thought I decided to do some research and after reading lots of reviews I decided to go for it and I purchased it from my catalogue which allowed me to pay over a longer period. It arrived very promptly and I unboxed the product which is very easy to hold and I took some time to read the instructions which is definitely worthwhile.

The Lumea has a sensor that allows you to colour match your skin type to prevent any pain from occurring and you have to use the product in a phase called ‘Bootcamp’ which is where you use the Lumea every two weeks and well miracles do happen the hair started to get thinner and thinner and after the 4th treatment it changed my life….. My hair was thick and dark and it would grow back the very same day. Now I have smooth long lasting hair free legs, I am free from spots and ingrowing hairs and my confidence is back. I just wish this product had existed years ago because I feel I have lost out on a lot of life where I have worried about things that I should not really have had to. Life is not fair on many people who suffer from all types of conditions and diseases.

There is no medical treatment for PCOS and there is no help on the NHS for the symptoms with many women having to suffer from extreme cases whose excessive hair growth means they grow beards and hair on their breasts; the NHS has classified any treatment for PCOS as cosmetic and refuses to help fund treatment which can cost thousands before you notice any improvement.

Today I have finally found something that works and that is thanks to Phillips you have changed my life.

I cannot guarantee this will work for every woman suffering from PCOS but it worked for me and one day I hope the NHS will realise that treatment to help with the symptoms of PCOS is not cosmetic but vital.

This site uses Akismet to reduce spam. Learn how your comment data is processed.